Now that autumn has really started, it is about time for our favourite innovations from the third quarter of 2018. We’re happy to share our ‘favourite four’ with you!

In August cancer patients at the UMC Utrecht were treated for the first time with a device called Unity. Unity is the combination of a mri scanner and radiation device that Elekta, Philips and UMC Utrecht have been working on for almost two decades.

Normally, irradiation is carried out on the basis of a previously made scan and small displacements or changes in the dimensions of the tumor must be taken into account. By performing the irradiation in an mri scanner, the tumor can be precisely localized during the treatment. As a result, a much smaller margin can be used, the impact on surrounding tissue is reduced, the dose can be increased and fewer treatments are needed.

Integrating the two devices is technically difficult, because the scanner generates strong magnetic fields and RF pulses and offers limited space. At the UMC Utrecht, the idea arose to let the linear accelerator shine through the scanner wall from the outside. With various research grants and with the help of Elekta and Philips, they gradually developed this idea in more than a concept. Last June, after most to decades of research, this eventually led to an approved system: the Unity of Elekta.

Up to now, Unity is used for the treatment of metastases in a small group of patients. In the coming years, this must be expanded step by step. In two years, the UMC wants to help around a thousand patients a year.

The environmental impact of a car is not only determined by its consumption, but also by its production and final recycling. Students from Eindhoven University of Technology have therefore developed a car that has been optimized for all of these aspects: Noah was born. Noah is an ultra-light electric-powered prototype based on flax fiber and sugar, with a consumption equal to 1:300. This city car with two comfortable seats and a spacious trunk, has a top of 110 kilometers per hour and a range of 240 kilometers.

Noah is made from a bioplastic, made out of sugar and flax fiber. The bodywork of the car is made of flax mats that have been injected with a biobased resin. These biological and extremely light materials still have the required strength but consume up to six times less energy in production than the usual lightweight materials in the automotive industry, such as aluminum or carbon. The flax used is a crop that is necessary to enrich the soil and so its cultivation does not compete with food production.

At the end of its life, the biocomposite can be ground and used as raw material for other products, such as bricks. The non-biological parts of the car can be included in the existing recycling chain. Research by the TU/e team shows that there is no other, driving car that has an equally low environmental impact over its entire life cycle, not even a prototype. 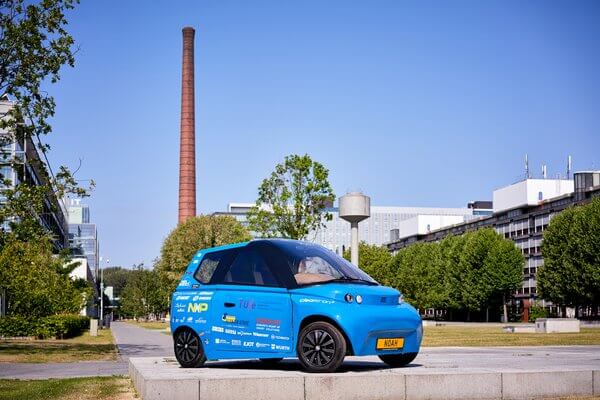 Researchers at TU Delft have developed a new technology for drones. This technology enables a drone to register all stationary and moving objects in its surroundings during an autonomous flight, such as trees, masts, birds of prey and helicopters. Thanks to this technology the drone constantly adapts its own flight path based on the moving objects it registers.

Project manager Bart Remes explains that de drone uses its own speed, its own direction (the vector) and the vector of all other moving objects in the area. Based on this information the drone continually determines the best flight path.

The new technology, on the long-term for example applicable to medical emergencies, should make autonomy in drones more affordable. 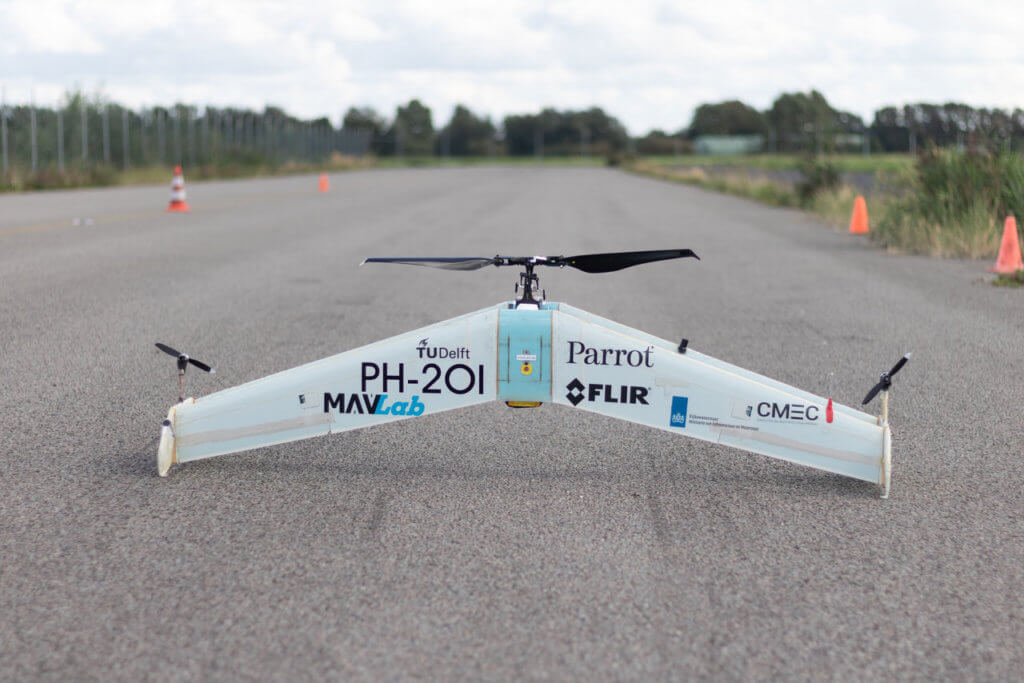 In Arnhem Plastic Fantastic is building an office out of recycled plastic. Erik Roelevink and Bram Peters, initiators, state it will be the first office of waste plastic in the world. By building the office Plastic Fantastic hopes to unleash a worldwide revolution in the fight against “the plastic soup’ on our planet.

The office will be a modest building of 60 square meters. Immediately after they finish the office, Roelevink and Peters start with the building of a small house.

Peters leads the successful company Save Plastics, which makes all possible products from recycled plastic, such as bridges, river banks, light poles, scaffolding, benches, dams and fauna passages. Save Plastics now saves about two million kilos of plastic per year from waste that would otherwise end up in incineration or in nature. Peters states that it’s all about motivating people all around the world to collect (plastic) waste from the environment, which will get an impulse if it can be demonstrated that the plastic is worth money. According to Peters the building of the office and house are an important step forward in this.

The office is expected to be ready next spring.

The world is ours.